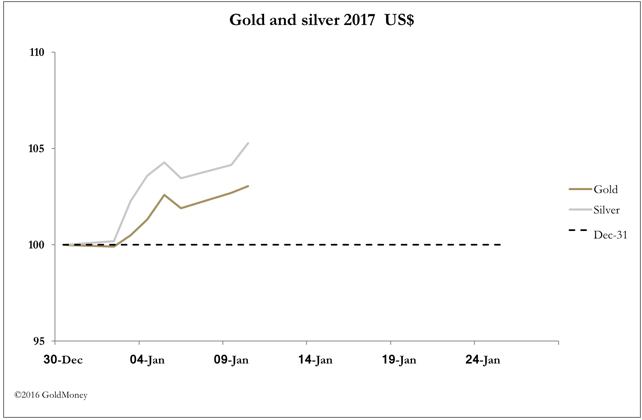 Gold and silver continued their rise this week in very light physical trade, though trade in futures was active. From last Friday’s close, gold rose $20 to $1193, and silver by 30c to $16.76 in early European trade this morning.

Behind the rise in gold was a fall in the dollar, which had been very strong in the second half of 2016. In early European trade this morning prices have opened steady, below the intraday highs of yesterday, as dealers try to decide if there will be some profit-taking after a strong week.

Just as at this time last year, technical traders have been badly wrong-footed, with the large majority short of gold and long of the dollar, going into the first days of January. Some of them will still be hoping that this is a rally in a gold bear market, pointing out that theoretically there is overhead resistance at the 55-day moving average, which is at about $1195. So far, there is little sign this level will be a significant barrier to further rises.

The bulls of the dollar have some information to chew on. There has been a very strong rise in recent months, so some consolidation might be overdue. The next chart shows the longer-term picture. 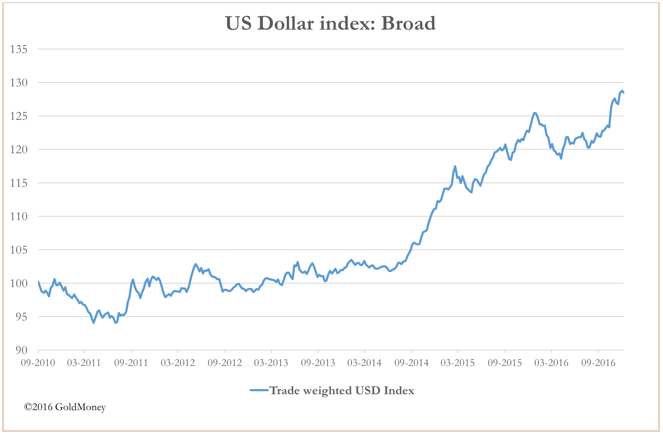 Even with some short-term consolidation, the dollar looks like it is in a well-established uptrend. Given that the euro dominates the index’s weighting, the precarious state of the Eurozone will most likely continue to drive the dollar index higher. Add into the mix sterling, the yuan and the current weakness in the yen, and it is very hard to be negative about the dollar’s outlook.

The short-term weakness for the dollar perhaps reflects the choppy waters the President-elect finds himself in ahead of his inauguration. However, even with the strong dollar, commodity and energy prices have been rising, proving beyond doubt that global inflation pressures are greater than dollar-centric headlines would suggest.

Another reason for dollar strength is the US economy is performing quite well, contrasting with the disaster that’s the Eurozone. President Trump intends to stimulate the economy even further, which is bound to lead to overheating, and higher than expected price inflation. Again, it’s worth repeating that if the strongest currency faces higher price inflation, just imagine how bad it will be for all the others.

This helps explain perhaps the very strong demand for physical gold, irrespective of the games played in futures markets. It is little wonder that non-Americans are loading up on bullion. To illustrate this theme, our last chart shows gold priced in the four major currencies, which gives a better illustration of the strength of the rally that actually started in mid-December. 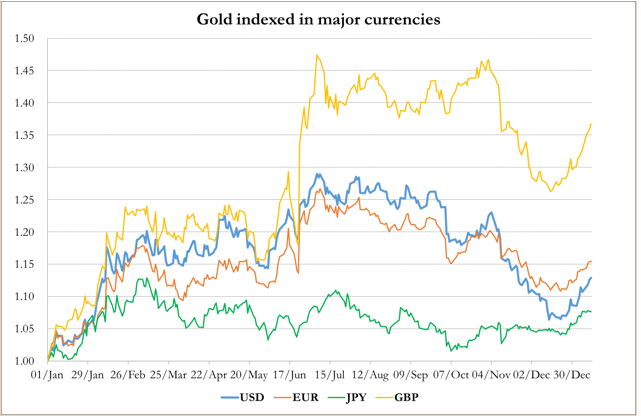