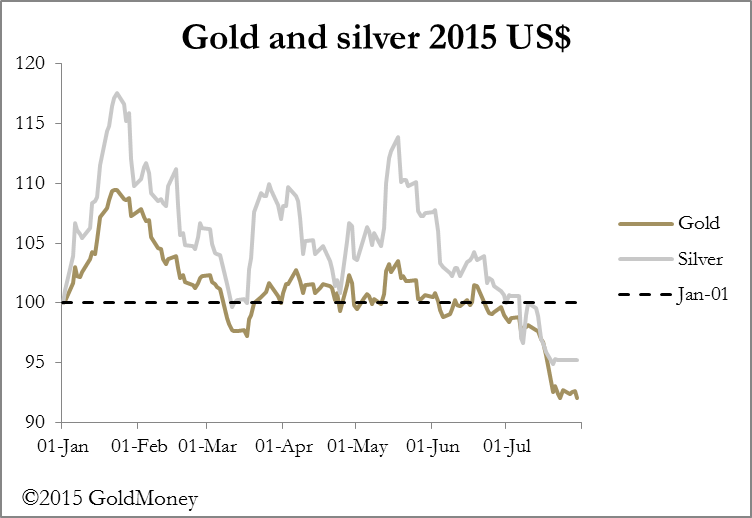 Gold and silver remain close to their lows for the year, discouraged as usual by dollar resilience.

Precious metals appear to be in limbo: speculative buyers are discouraged above all by their disappointing performance during the Greek crisis, and the possibility that a Chinese stock market crash might lead to forced selling of gold by Chinese speculators. So far, the latter concern has proved unfounded with public demand in China accelerating on lower prices and exceeding global mine output on its own. As well as Chinese demand, anecdotal evidence tells us that at these prices physical demand from the public has increased elsewhere, with gold sovereigns becoming scarce in London. And our dealers yesterday reported buyers outweighing sellers this week.

Desultory trading has led to a large fall in open contracts in gold futures on Comex, with the August contract running off the board instead of being rolled forward. This is shown in the next chart, and we can assume that this will have relieved the oversold condition somewhat. 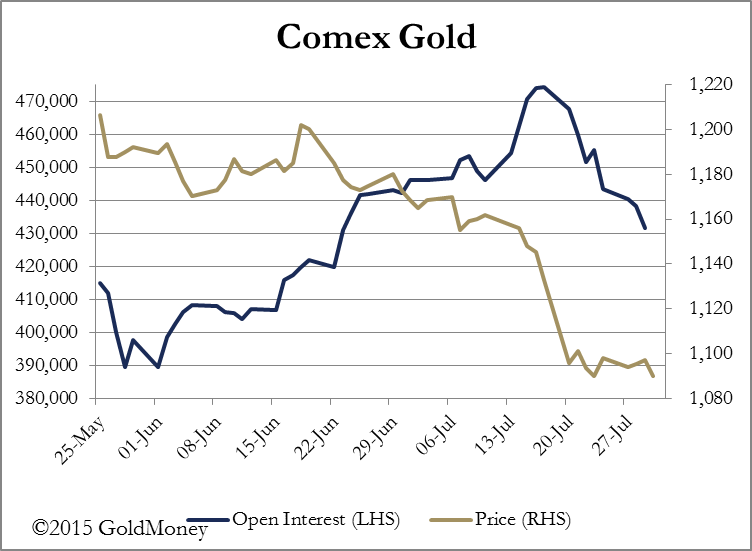 The gold price bottomed last Friday at $1,079, and after rallying from that level to a high of $1,104 was sold down yesterday morning to a low of $1,083, which is the same price in early European trading this morning. Silver fared better, outperforming gold, and in this case open interest has held up, the nearest active contract being September. This is our third chart.

On Wednesday the Federal Open Market Committee published their latest minutes, which were virtually unchanged from the previous ones. According to Fed-watchers, the odds probably favour a December rate hike over September, assuming no other factors come into play.
The Fed has so far dismissed suggestions that external factors will affect its timing, such as a collapsing Chinese stock market and a weakening euro driven by a rapidly disintegrating Greek economy. But it is hard to envisage a Fed that simply ignores these important developments, when a higher Fed funds rate would increase global asset and currency instability.

For now, this is a topic of uncertainty, coming towards a crunch-point. Both these problems are likely to strengthen the dollar, particularly against the euro, which looks likely to weaken to under dollar parity. Until this issue is resolved, gold faces selling pressure in futures markets.

This analysis describes what looks like a developing crisis. On one side are the markets, which are awash with fiat currency beginning to be driven by fear; on the other is the Fed, seemingly powerless to act conventionally with interest rates at the zero bound. For patient holders of gold it can only be a matter of a month or two before something breaks, but until it does it could continue to be a rough ride.

I shall tweet Chinese demand for last week when the information becomes available today on @MacleodFinance.