Market Report: How oversold can gold get?

Gold is now extremely oversold, with emotional opinion in paper markets unanimously bearish. Traders tell us the 200-day moving average is well and truly broken and the next support level is $1260. However, when gold broke down through the $1280 level yesterday it rallied sharply to test the $1300 level in a one-day spike reversal.

Market chat and technical analysis are one thing; more important are the motives behind the commentary, revealed by a dispassionate look at Comex figures. And here we see that Producers and Merchants short positions have fallen to an eight-year low at 73,033 contracts, against a long term average of 186,400. This is the primary source of liquidity for all futures markets, and it has simply dried up.

Swap dealers have also cut their shorts dramatically, reducing their net position by 26,582 contracts, and the eight largest traders between them have a level book. In short, the bears have to persuade us to sell, or they will be in trouble.

The figures quoted above are as of 15th April. Since then the gold price confirms this analysis by refusing to go lower and stay there (hence yesterday's spike reversal), while open interest has risen from the post-Lehman crisis low on 4 April. This is shown in the chart below. 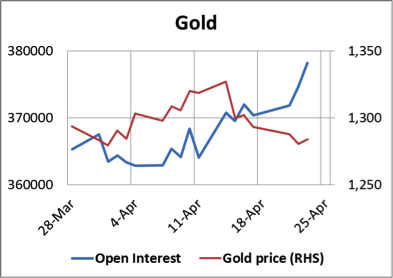 The rise in open interest tells us that the shorts, mostly hedge funds, are opening new positions and failing to drive prices lower, so the market is being set up for another bear squeeze. By way of confirmation the gold forward rate in London remains negative up to three months out, indicating an extreme shortage of physical metal at these prices.

In these markets sentiment can change very rapidly. We read this week that the US is on the brink of another housing crisis because sales (demand) have stalled. Last weekend the Ukrainian protagonists met in Geneva and agreed to "de-escalate" the situation. By Monday the situation was escalating again.

Oh, and the best contrary indicator of the lot was also on Monday, when according to the Wall Street Journal's Market Watch blog, for the first time ever all 72 economists polled by the National Association for Business Economics expect the US economy to grow this year. It is usually right to bet against such unanimity in economists.