Gold drifted lower in pre-Easter trade, while silver held steady. Gold lost $16 by noon today EST (Thursday) from last Friday’s close to trade at $1274, and silver gained two cents at $14.99 over the same timescale. On Tuesday, a seller of 11,000 Comex gold contracts drove the price down through the $1284 level, triggering the slide to lower prices. 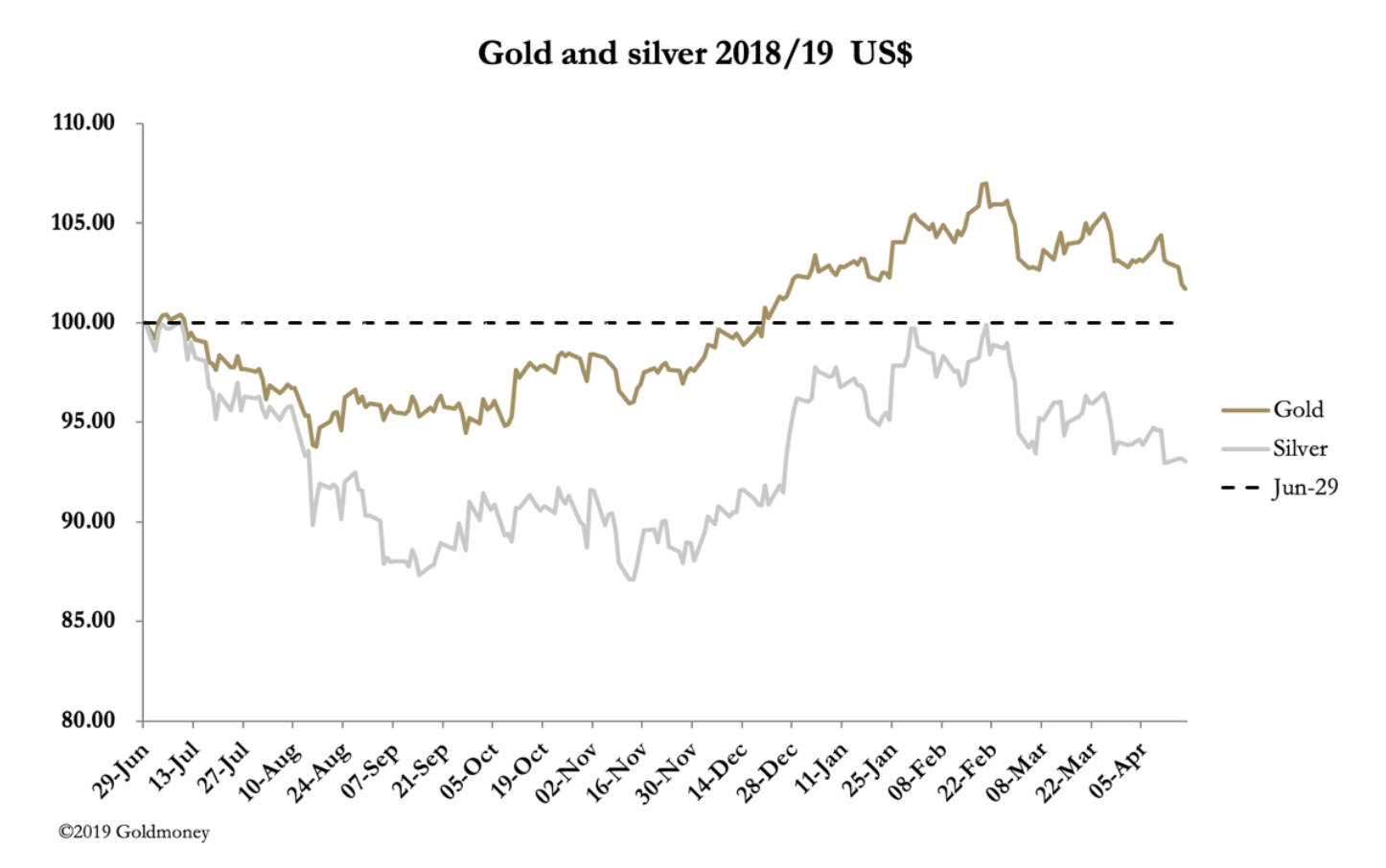 Suspicious minds think in terms of official or quasi-official manipulation. Whether this was the case we will never know. But any aggressive trader could have taken a punt on driving the price below support levels, taking out stops on the way. Thin markets ahead of Easter are an ideal time for operations of this sort.

The gold contract looks oversold. On the last Commitment of Traders report (9 April) the managed money category was net long 37,000 contracts, against an average net long position of 110,000. Since then, it’s a fair guess that this will have dropped further. Another important consideration is shown in our next chart, of open interest.

Open Interest has fallen to unusually low levels, only recently exceeded in the sell-off last November/December. The lack of speculative interest implied in the low number makes it easy for the swaps (bullion banks) to move the price around. And here we note something else: Exchange for physicals (EFP), having been subdued lately have picked up. What this means is an average of 11,000 contracts per trading session are being moved over to other markets, presumably the London forward market. It looks like short-covering in the London market is being supplied from Comex.

In short, the market price of gold appears to be being pushed around for technical reasons. For the moment, silver seems to be finding support at just below $15. Allowing for the smaller market, Comex trade in silver is relatively healthy. The May contract is running off the board, which is partly responsible. Unless traders continue to roll over positions into the next active contract, next week the May expiry could begin to undermine the price.

The dollar’s trade-weighted seems trapped in a trading range defined by a gradually tightening wedge. This is up next. 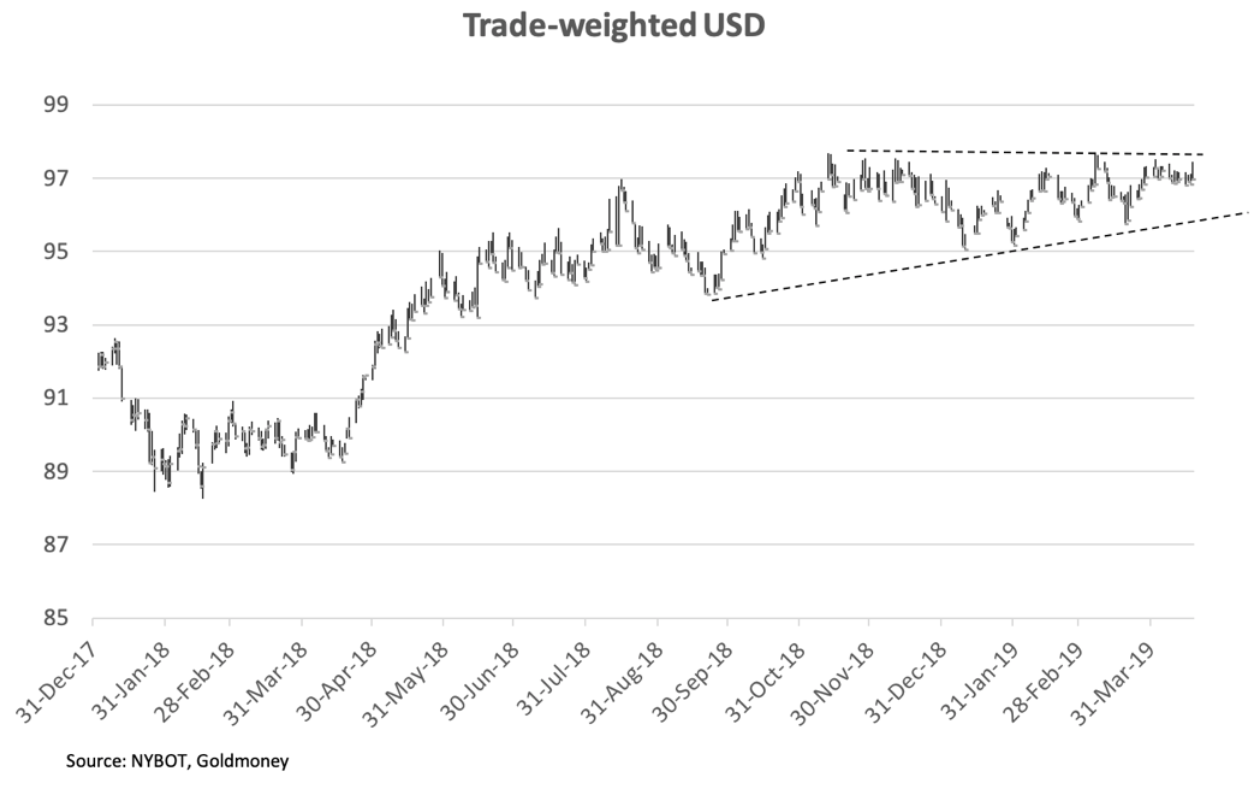 On other side of this is the euro, representing roughly half the dollar’s trade weighted index. This week it lost a cent against the dollar, driving the dollar up to test the 97.5 level on the TWI today. It is important for gold traders to appreciate it is euro weakness rather than dollar strength that makes the dollar look good.

Our last chart is a technical look at gold. 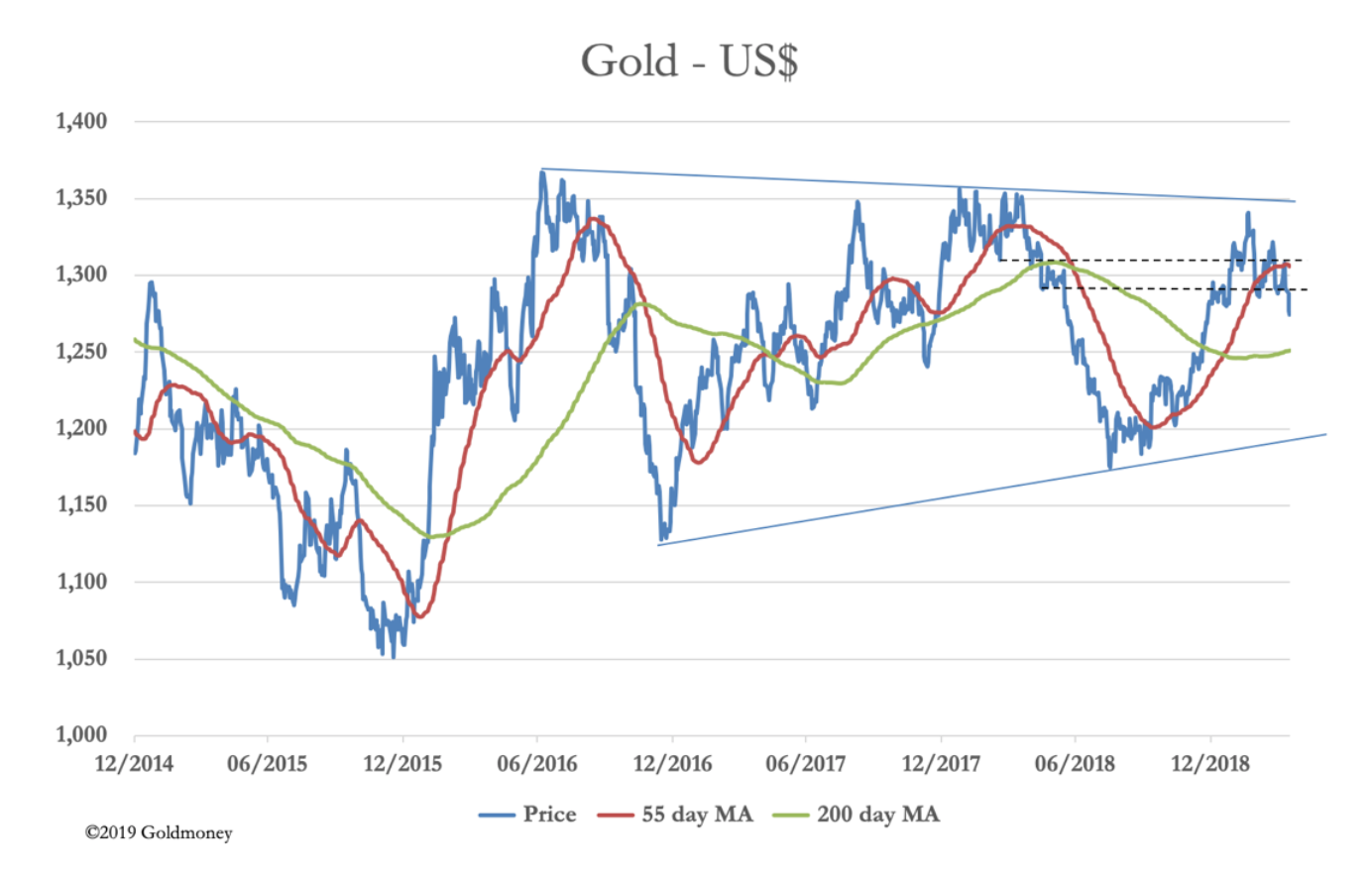 Gold has clearly broken through support at $1285-1310 and appears to be heading to test the 200-day moving average at $1250. While this is uncomfortable for the bulls, it would make for a normal correction of the previous bullish move.

Demand for physical gold continues apace, with withdrawals from the Shanghai vaults at a high 218 tonnes in March. Over the last four years it has averaged 170 tonnes per month, or a little over 2,000 tonnes per annum. The physical market appears t