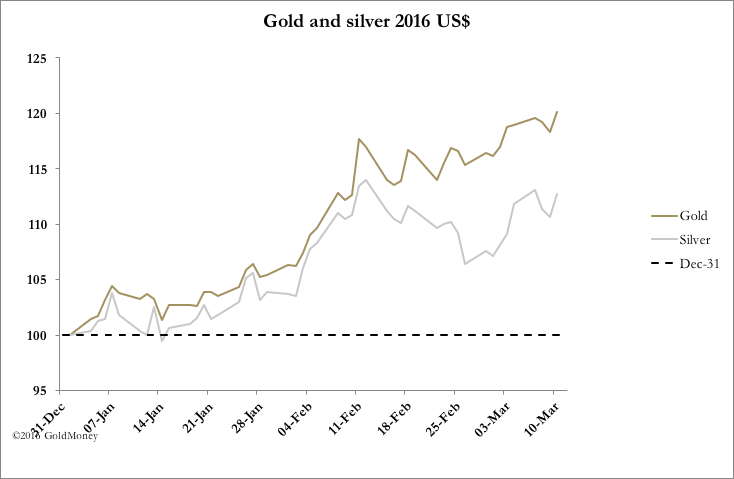 Despite a sharp run-up over the last two months, gold's consolidation of previous strength has been a three-week sideways affair.

The technical position has improved sharply, and chartists will generally be enthusiastic. I describe the current bullish set-up in my Insight article, published yesterday.

The bullion and investment banks have been generally caught unawares by gold's performance, and have thrown the kitchen sink into the futures market to try and stop the rise. Open interest hit a record of 499,110 contracts this week. From the end of January, when the bears had finished closing their positions and the hedge funds began to turn bullish, extra paper gold was conjured out of thin air by the bullion banks totalling the equivalent of 391 tonnes of gold worth $16bn. If physical demand continues to build, bearing in mind that gold ETFs have seen net inflows every day for the last six weeks, there will be some serious losses for the bullion banks to absorb.

Comex's open interest and the gold price for the last ten weeks is shown in the chart below.

The small downturn from record open interest is worth discussing. It also happened on or about the 18th February and the 25th February. In the past three years, a falling price was often accompanied by an initial rise in open interest, reflecting bullion banks increasing their shorts in an attempt to drive the price down. This tactic has capped every rally in the market during the course of this bear market.

desks are quietly taking the opportunity to cap their shorts as and when they can. If this is so, it indicates that the bullion banks recognise they have a problem on their hands.

The most important news during the week was the ECB's actions to rescue the Eurozone from a prospective deflationary spiral. The announcement yesterday initially caused European equities to rally sharply, and for gold to fall $15, presumably reflecting the knee-jerk jump in the euro exchange rate. It turned out that this was very much the wrong reaction, with the German DAX index quickly losing over 5% from its best level, and gold rallying strongly to close up $18.

Let us recap the main points of yesterday's announcement. The ECB is deepening negative rates with the deposit rate to be set at -0.4% from Wednesday. Quantitative easing will be expanded an extra EUR20bn to EUR80bn per month, and will include investment grade bonds issued by non-financial corporations for the first time. A new series of targeted long-term refinancing operations (TLTROs) will commence in June. The TLTROs are a mechanism that allows the ECB to pay money to the banks at the deposit rate, fixed for four years, to encourage them to lend.

These measures are designed to stimulate confidence in the markets, maintain over-valued asset prices, and thereby encourage economic growth. The risk is they will be regarded as a sign of desperation, only matched by the impotent actions of the Bank of Japan. Indeed, it is hard to see how they will work, when the banks themselves are already over-geared on their balance sheets and have difficulty raising new primary capital, restricting their ability to expand their lending.

The Eurozone has only one card left to play, and that is fiscal stimulus. The removal of austerity becomes increasingly likely, which is probably what the gold price is trying to tell us.