By Alasdair Macleod
Market Updates May 15, 2015 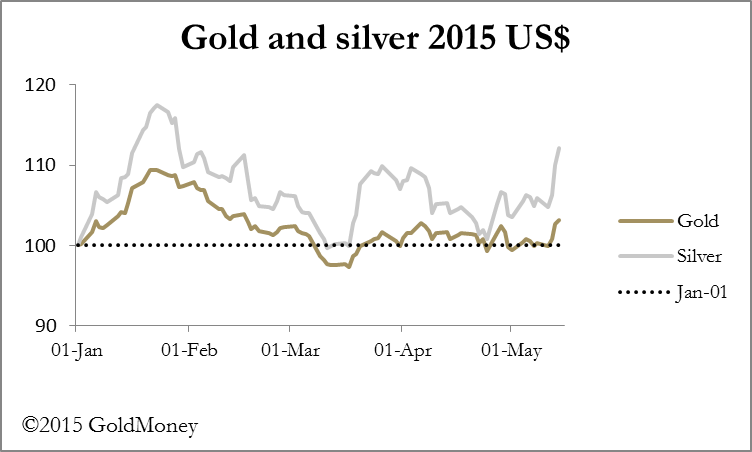 The US dollar continued to lose ground this week, contributing to a firmer trend for precious metals. Gold rose over $40 to $1223, and silver by $1.13 to $17.45, though prices initially opened a little lower in early European trading this morning, perhaps anticipating some pre-weekend profit-taking.

On the Comex futures market there appears to be increasing demand for gold and silver, with both volumes and open interest rising with the price. The next chart is gold. 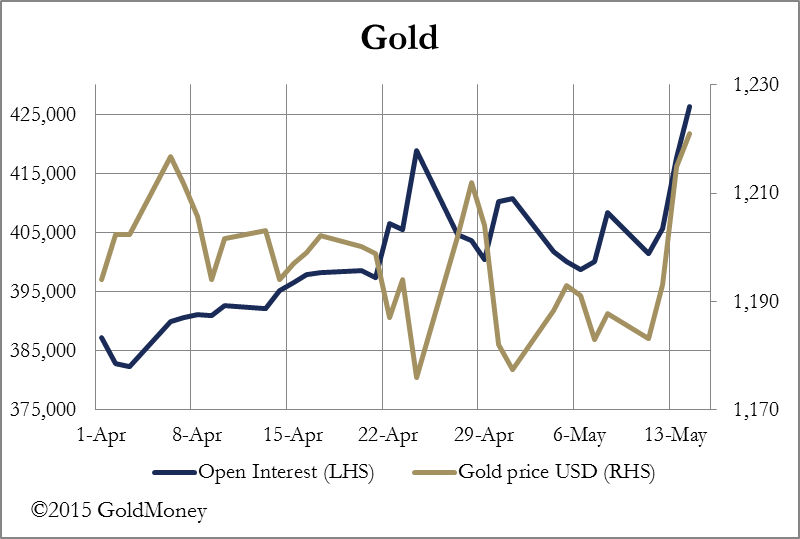 If the rise was fueled by bear closing, open interest would tend to contract. While there is almost certainly bear closing involved, it is clear that new buying is the dominant feature. Similarly, open interest in silver has recovered towards the record levels seen last month. This is illustrated in the next chart. 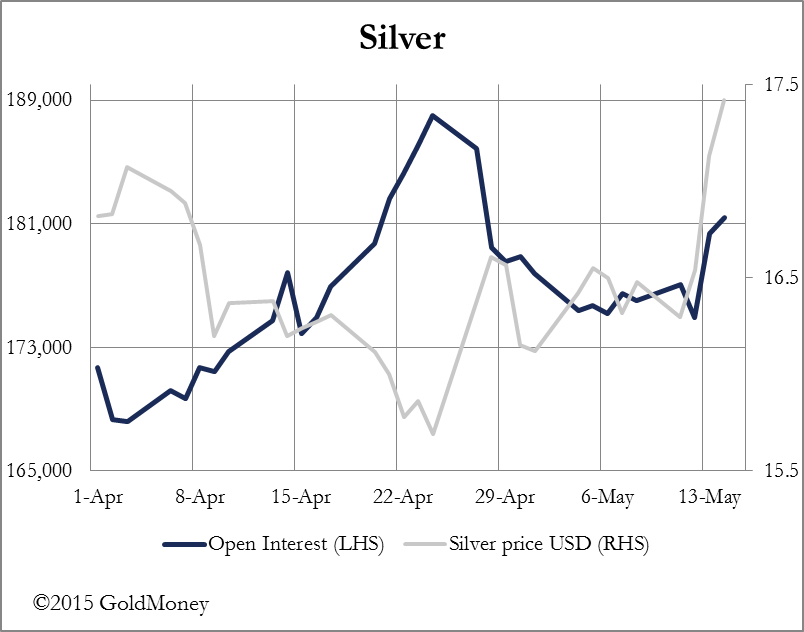 There has been significant volatility in bond markets this week, with yields along the curve steepening, and the difference between two and ten year Treasury yields increasing from 1.2% to 1.6% since early February. A widenining differential (known as a steeper yield curve) is normally associated with bond markets discounting higher rates of inflation, or increased financial uncertainty, or both. So if the yield curve continues to steepen, the dollar is likely to weaken further so long as the Fed is reluctant to raise interest rates. I expect this topic to receive growing attention in the coming months.

Gold has fared less well priced in sterling and euros, which have also risen against the US dollar, but it is still up by 1.5% and 9% respectively on the year. The attraction to Eurozone residents was recorded in this week's release from the World Gold Council's Gold Demand Trends for the first quarter of 2015, which showed a 20% increase in gold bar and coin demand from German citizens.

There are two obvious reasons for Eurozone citizens to buy gold.The first is the prevelance of negative short-term interest rates coupled with the banks' reluctance to pay out large amounts of physical cash, making gold an attractive alternative. The second reason is the continuing tragedy that is Greece.
Meanwhile, in Greece ordinary people are reported to be buying motor cars in order to dispose of bank deposits, with German manufacturers presumably benefiting most. The thinking must be that a mobile asset is a good thing to own at a time of financial crisis instead of bank deposits, confirming they have lost all faith in the banking system.