This week precious metals continued to consolidate January's gains in volatile financial markets, with both gold and silver range-bound. Platinum and palladium are up on the week, noticeably stronger than gold and silver. Physical and paper markets appear to have been behaving differently, with prices tending to be firm in London (where physical deliveries take place) and weaker in New York (which is overwhelmingly derivative trading), though at the close of trading in New York prices appeared more often than not to steady ahead of the Asian markets opening.

The US dollar has also been consolidating its recent strength, roughly in phase with the gold price. The logical conclusion from this action is that for the moment, sellers of the other paper currencies are hedging into both gold and the US dollar, which from the point of view of a non-US person faced with a weakening currency makes sense. So long as this relationship persists, it should also give us a clue on the timing of gold's next move, which will be when the overbought position in the dollar is unwound enough to support its next rise. We may already be there after yesterday's pronounced dollar weakness, which was technical in nature with the euro strengthening sharply despite a deteriorating Greek situation.

On Comex precious metal traders and bullion banks have been fighting a paper battle, and traders' positions have now normalised, as shown in the chart below, which is of the short positions of the Managed Money category in gold: 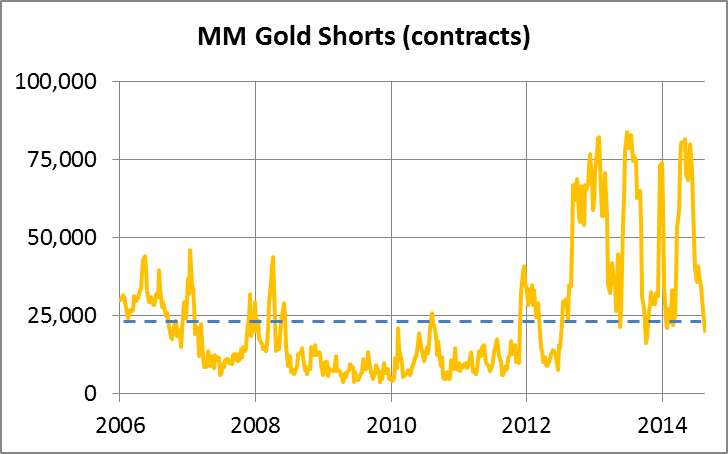 The dotted line is the long-term average short position, which after the extreme volatility of the last two years is where we are today. This return to normality has resulted in the largest four traders (basically the bullion banks) increasing their net short position, which is shown in the next chart. 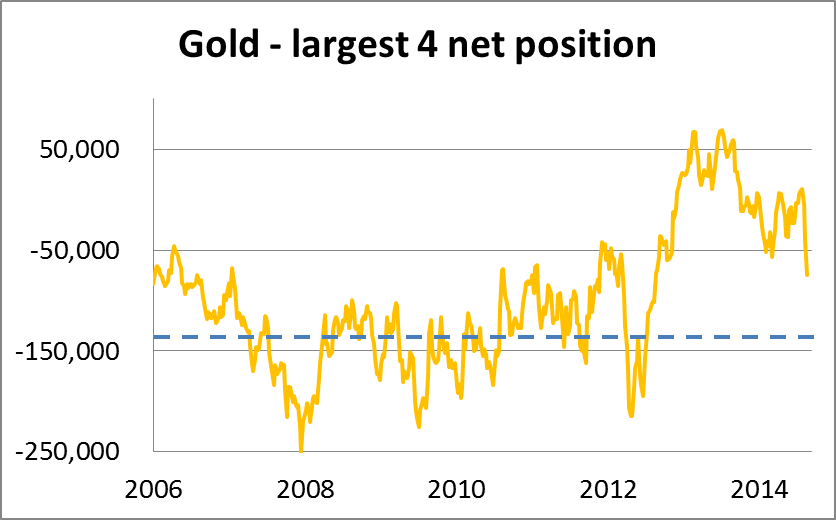 This is still well above the average since 2006, but with physical liquidity low, the bullion banks are unlikely to be able to tolerate escalating shorts to the extent they have in the past, so they might be forced to capitulate if buying increases much more. Until that moment we should expect them to make every attempt to shake out long positions by triggering stop-loss positions.

It will be important to watch big macro events, such as the possible fragmentation of the Eurozone, a run on Greek banks, particularly if it threatens to destabilise the euro or other Eurozone banks, as well as the developing crisis in Ukraine.

Tensions over Ukraine have rapidly escalated this week, and might become a factor for gold and silver prices next week if America sends military equipment, Russian tanks start rolling, or both. We must hope the Merkel/Hollande peace initiative defuses the situation.