The unstoppable growth of US money supply

After all the fuss about tapering, it is worth remembering that central banks can and do expand the money quantity without quantitative easing.

Put simply, so long as a central bank decides to hold interest rates at a chosen level and is prepared to provide liquidity to any bank that requires it, the central bank stands in the market to offer unlimited quantities of money at the stated rate. As a result central banks are like motorists who do not know how to reverse from lack of practice. And the only times they apply the brakes are when bank credit is expanding more rapidly in proportion to measures of narrow money, and then always too late to avoid an accident. This is the well-established sequence of the monetary cycle of boom and bust.

The continual expansion of deposits was even true during Paul Volcker’s time at the Fed, and is illustrated in the chart below of true money supply (TMS), which is comprised of cash and liquid deposits at the commercial banks and covers the years of his tenure. 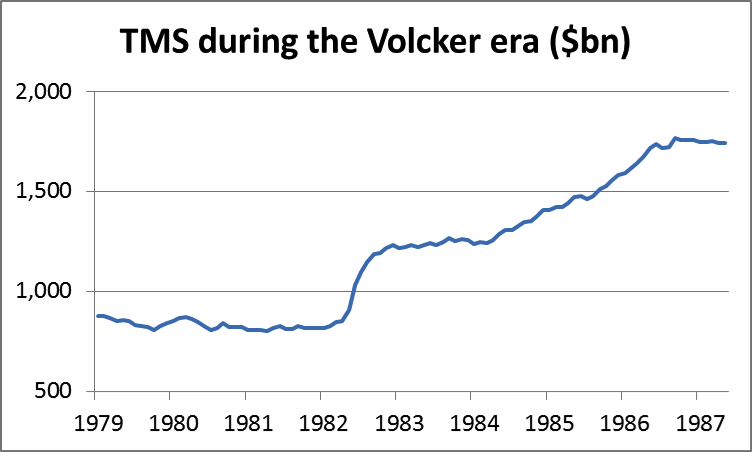 The Fed raised the fed funds rate from an average of 11.2% in 1979 to a peak of 20% in June 1981, and TMS hardly fell. However, any fall was only statistical, because before 1982 banks were limited by Regulation Q of the Banking Act 1933 to paying interest on accessible savings deposits at a maximum of 5.25%, even though Treasury bonds were yielding more than double that at the time. Consequently deposits moved away from bank accounts to other savings vehicles. This anomaly was corrected in 1982 by deregulation, when money-market deposit accounts for $2,500 and over with no interest rate restrictions were permitted, followed by the Super NOW accounts in January 1983. This is the reason for the sudden increase in TMS at that time.

Taking these distortions into account, it can be seen that not even a sharp rise in interest rates halted monetary growth. Furthermore, during Volcker’s chairmanship TMS actually doubled. So we can conclude that even when the Fed tackles price inflation with draconian measures it does not actually restrict monetary growth.

The lesson for today is that even if the Fed was to taper, it would most probably be wrong to think this would be to restrict monetary growth. The Fed is wholly committed, as is the ECB, the BoE and the Bank of Japan, to maintaining close-to-zero interest rates for up to two more years, which is the overriding consideration.

QE is a very effective way to ensure monetary expansion, with the additional benefit that it finances the government deficit at virtually no cost. The financial markets and the general public have fully accepted QE as a valid method of pursuing monetary policy and are not alarmed by potential inflationary consequences.

What is more important for both central banks and the markets generally is the firm belief that monetary expansion will continue. It would be a pity, so far as the Fed is concerned, to reduce or give up QE, because it would have to use other means of deposit creation. But with respect to monetary creation that is all.