The Iron Law of Money

The Iron Law of Money

The spread of negative interest rate policies around the world, heralded by economic officials as the answer to the disappointing results of zero-rate policies and quantitative easing, is in fact nothing of the sort. By degrading the nature of money, negative interest rates will have commensurately negative consequences. As savers and investors seek non-negative yielding monetary substitutes, gold and silver prices are likely to continue rising.

What is money? The spread of negative interest rate policies around the world, most recently to Japan, provokes this otherwise banal question. The answer might appear simple, in that textbook definitions of money normally list the following three properties:

Let's consider the latter of these three carefully. A store of value must be something which retains its purchasing power over time with a reasonable deal of certainty. But by that definition, there are many currencies in the world today, including major ones, that don't measure up. While consumer price inflation is generally positive, if low, in many countries, outright negative interest rates imply that money will lose purchasing power at whatever stated, official rate. The more subtle erosion of purchasing power associated with negative real interest rates is thus morphing into a blatant, overt tax on cash balances.

In a way, this is just another iteration in the official abuse of money over recent decades. Following the spectacular global financial crisis of 2008-09 the global monetary base exploded in size, although for the most part this money has not been distributed outside of the financial system. Banks are not lending, due to a combination of weak new loan demand and stricter lending criteria. Indeed, in many countries, such as in the euro-area for example, there has been an outright contraction of bank lending taking place. While this is potentially deflationary of consumer prices, it is interesting to note that, so far at least, consumer price inflation remains positive in most major economies.

There remains an active debate out there regarding whether investors should be primarily concerned about inflation or deflation. Yet with monetary policy lurching from one unconventional policy to the next it is difficult to commit to one side or the other because there is just no way to know exactly what is going to happen on what time horizon. There might be periods of sudden inflation alternating with sudden deflation. But where we can be certain is that, as negative interest rate policies spread around the globe, fiat currencies cannot possibly be regarded as reliable stores of value, if indeed they ever were.

Looking back at how fiat currencies have fared as stores of value in general since the US formally abandoned the gold standard in 1971, one finds little reason for optimism. If most currencies didn't function well on average as stores of value from 1971-2007, when financial systems were stronger, monetary policy was more conventional and deficits and future entitlements were far lower, one should seriously doubt that those same currencies are going to fare any better in a world of negative interest rates, where cash balances are being taxed. The dollar, still holding pre-eminent reserve currency status, may be most at risk as the US has gone from being the world's largest creditor nation to the largest debtor. But the euro-area, Japan and most other developed and also emerging economies have serious issues of their own. Some investors may remain optimistic that the current, unprecedented level of government intervention in financial markets and economies is going to compensate for the accumulated misallocation of resources that has taken place via a series of progressively larger asset price bubbles and busts in recent years, but history suggests that this will not end well. In our opinion, negative interest rates are more likely to exacerbate than to ameliorate the current set of economic and financial challenges. 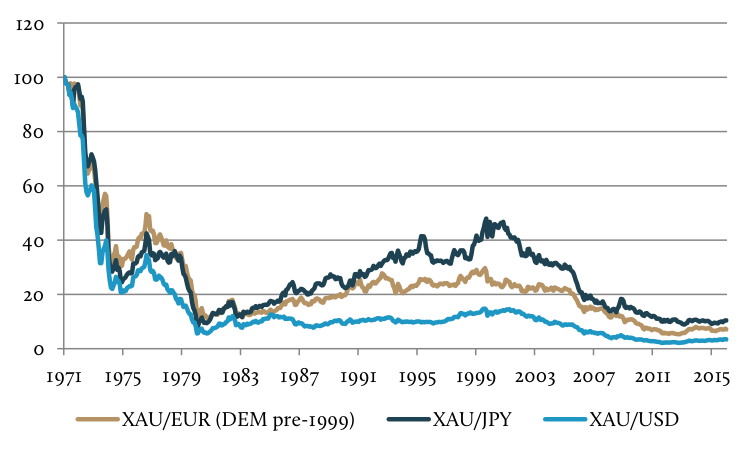 However, as interest rates go negative, the opportunity cost of cash in hand, or consuming today, rather than in the future, also goes negative. Why then don't consumers in negative rate economies just go to the bank, take out a huge, low-rate loan, and throw a big party? The answer should be obvious: Human beings, irrational as they may be, tend to have the sense that they should hold something in reserve for the future. After all, no matter how much you eat today, you are not going to be able to store these calories efficiently and slowly burn them off for the remainder of your life (which, indeed, might be cut rather short if you were to try). Nor is it practical or realistic to try and sort out your wardrobe or even shelter arrangements for the remainder of your life all in one big shopping spree. (For those with children or other responsibilities that will outlive them, there is also the desire to plan for what might be consumed by others, after we have gone off to happier places absent such inconveniences as the fundamental laws of economics.)

There is, therefore, a natural constraint on how much consumption will be brought forward in response to negative interest rates, even in the case of those considered rather profligate. For those who are relatively conservative financially, negative rates are not going to prevent them from continuing to save a significant portion of their income and, in response to a sharp economic downturn and loss of job security, many indebted individuals might decide to pay down some debt, notwithstanding the negative cost of rolling it over. Some might choose to walk away from their homes rather than service a mortgage greater than the market value of the property. Others might return a leased car to the dealer. A few might declare bankruptcy and start over. There is just no way to know exactly how individuals are going to respond to an economic crisis, especially one that occurs in an environment of negative interest rates.

These sorts of decisions are unpredictable and unquantifiable, yet naturally arise in response to changing economic circumstances. Characterized by Keynes as "animal spirits", they continue to be regarded as essentially irrational by neo-Keynesians today. But it is important to beware when an economist begins to talk about behavior being "irrational", because what this implies, in practice, is that their models simply cannot account for it.

Now in the same way that economists struggle to come to terms with supposedly "irrational" consumer behavior, they also find it troublesome that investors sometimes lose confidence in the sustainability of fiscal and monetary policies and, therefore, engage in "irrational" and supposedly damaging behaviors disparagingly referred to as "speculation" or "hoarding".

Rather than respond to negative rates by doing supposedly sensible things like ploughing their capital right back into a weak economy, notwithstanding soaring government deficits and central bank balance sheet deterioration, "irrational" investors might instead seek to reduce and diversify the risk of their investments. They might "hoard" physical cash (although the economic authorities may well ban this practice). They might "speculate" in monetary substitutes that may offer no interest but at least are not subject to the negative rates imposed on cash deposits and government bonds.

With the spread of negative interest rates from one major economy to another, such a move into monetary substitutes must now appear unusually attractive in a historical comparison. This is one way in which to understand why, in recent months, as sentiment has shifted toward expectations for outright negative interest rates in Japan, the euro-area and possibly the US, the price of gold has sharply reversed its previous bear market alongside other commodities. This is because gold, amongst all commodities, is the pre-eminent monetary substitute.

If the store of value function of all major currencies is substantially undermined, as indeed it is by negative interest rates, then investors are going to have to look for a non-national currency alternative. Historically, gold and silver have most frequently served as reliable, stable international stores of value, protecting against devaluations and default generally. But there have been many cases of other commodities serving as stores of value at certain times and places. There is no reason why, in an age of globalisation, that any commodity that is liquid and widely traded cannot offer some useful diversification. These commodities will thus increasingly be hoarded, eventually driving up commodity prices generally. But gold and silver will lead the way.

Which brings us to an important point: If currencies in general are offering negative rates of interest, then what, exactly, is the opportunity cost of diversifying into zero-yielding commodities? Zero! And if commodities offer greater diversification benefits than a basket of negative-yielding currencies, which should you overweight in a low-risk, defensive portfolio designed primarily to function as a store of value?

Diversification is held, rightly, to be the only "free lunch" in economics. Not Keynesian pump-priming; not central bank interest rate manipulation; not holding an asset for the long-term just because history has been kind (eg equities, housing). No, diversification is the only exception to this other Iron Law of economics. And in a world of negative rates the benefits of diversification into gold and silver are available at a favorable, non-negative yield. This is having the effect of shifting the demand function for gold and silver. With supply for both gold and silver growing only slowly and steadily over time as a result of costly mining production, however, negative interest rates thus imply potentially far higher prices in future.